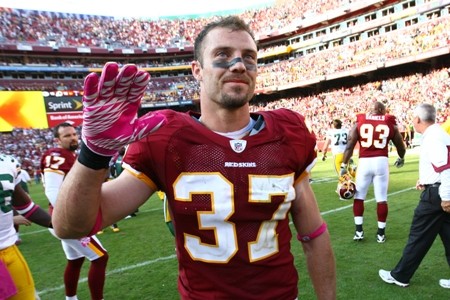 Veteran safety Reed Doughty was released by the Washington Redskins on Wednesday. The safety position in Washington is the most crowded and competitive spot on the roster. Doughty could not make the cut with players like Brandon Meriweather, Ryan Clark, Tanard Jackson and Phillip Thomas competing for the starting spot.

Doughty was drafted by the Redskins in the sixth round of the 2006 NFL Draft out of the University of Northern Colorado. He started out playing on special teams. Doughty made his first start against the Dallas Cowboys on Week 11 of the 2007 season and ended up starting the rest of the season after the passing of Sean Taylor. In 2009, he made his first career interception against the Cowboys in Week 16. The following season, he recorded a career-high 93 tackles as well as one sack and a forced fumble. He finished his eight-year career with the Redskins with 506 tackles, 3.5 sacks, three interceptions and three forced fumbles.

Doughty has faced a lot of trials and tribulations throughout his NFL career. He has a severe hearing impairment that makes him almost deaf and his first son, Micah, was born prematurely and suffered kidney failure as a baby. Doughty also had the duty of replacing the late and great Sean Taylor during the 2007 season.

Throughout his eight-year career with Washington, Doughty has always played to the best of his abilities on every play. Former defensive coordinator Gregg Williams called him an “overachiever” and “one of the smartest football players he has ever seen.” However, injuries had plagued Doughty for many years and has led him to his release by the team. He looks to continue his public work with supporting organ donation through his son’s story.

As a Christian, Doughty has always been a big help to the Northern Virginia community through his outreach with his wife Katie. This was his farewell address to the Washington Redskins via Instagram:

“Been a good 8-year run with the @redskins. Want to thank the Redskins organization, especially HOF coach Joe Gibbs. He valued character, hardwork and special teams. He believed in me enough to take a chance on me and draft me.”

“Thanks to my family, friends, coaches, teammates, fans, trainers, equipment managers, and all the people inside the redskins building who I have interacted with for 8 years. Thanks to the people at @VSI_spinemd and @thevtfc for getting me healthy after I thought my career was over prematurely. Most of all I am thankful for the relationships I have built over the last 8 years.”

“Thanks to my church @cfcwired and our small group bible study. This group has encouraged me and my family, prayed for us, and have become lifelong friends. God never ceases to amaze me. I pray that my life will be a living testimony of his faithfulness, mercy, grace and love. Whether I continue on my NFL journey or transition into a new career, I am thankful. I have my best friend, my wife Katie Deters Doughty, to share life with and raise our boys together. God Bless!” (Credit: The Washington Post)