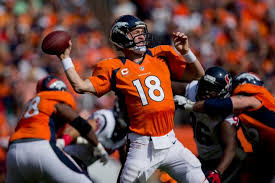 No matter who wins the conference championship games on Sunday, the Super Bowl will feature an experienced quarterback vs. a young and athletic quarterback. Tom Brady and Peyton Manning will face each other in the AFC Conference Championship game and Russell Wilson will battle Colin Kaepernick in the NFC Championship game. Now as history as showed us, the last Super Bowl champions have all been led by young, talented quarterbacks such as Joe Flacco, Eli Manning, Aaron Rodgers, Ben Roethlisberger, and so on. However we all know that football is a team sport, but the quarterback is the main part of the team. So which matters most? What part of a quarterback would you rather have on a team? Well, whether you have an old quarterback or a young quarterback, it all comes down to one thing: skill. If you don’t have the ability to drive down the field and win, it doesn’t matter how old you are, you’re going to lose. What I like from Kaepernick and Wilson is that they both have great arms and they have the legs to get them out of sticky situations. Manning and Brady have quick reactions and can get the ball of their hand fast enough to make a play. Experience will help you to read defenses, which is what Manning and Brady are better at doing. Wilson and Kaepernick are too young to know how to properly read a blitz, a man, or a zone coverage. However, Kaepernick and Wilson are both unique items in this conversation. Wilson has won two playoff games already (one on the road at Washington in his rookie season last year). Kaepernick took over midseason for the 49ers and led them all the way to the Super Bowl. So if you ask me, I personally think that a young, athletic quarterback is something I rather have. Nowadays, if you’re not an athletic quarterback, you’re not going to win football games. That’s why the top three quarterbacks in the draft this year are Johnny Manziel, Blake Bortles, and Teddy Bridgewater. What do all three have in common? Athleticism. They can make plays with both their legs and their feet. You’re seeing more and more quarterbacks that are dual threats. The classic pocket passer is a dying breed. So if I were to build my Super Bowl-winning franchise around a QB, it better be one that can run.

21 thoughts on “Experience vs. Athleticism”